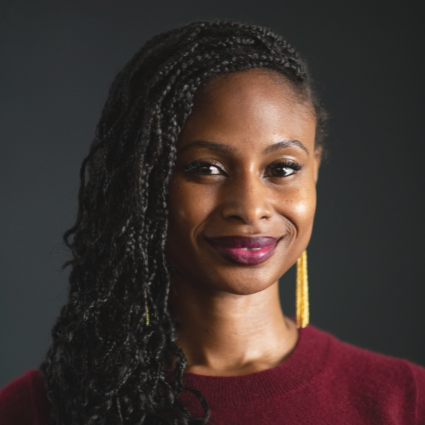 Adaeze Elechi is an award-winning filmmaker, audio storyteller, and author focused on telling African and Black diaspora stories. Her works are influenced by her desire to better understand the ways individual and collective histories influence our present understanding of ourselves, as well as a desire to explore spaces of intimacy and softness within and between people. She is a 2019 Logan Nonfiction Program alum, where she received support for this new Biafra war project. Her films have screened at the St. Louis International Film Festival and the San Diego Black Film Festival, among others. Her audio documentary “My Mother’s Biafra”, a snapshot of the war as told by her mother, was acquired and published by The Africa Knowledge Project. Her collection of short stories and poetry “Harmattan”, an exploration of loss and grief guided by ancient Igbo traditions, was published by Bottlecap Press in 2019 and was a finalist for the New Millennium Award for Fiction that year. Her works have appeared in Guernica Magazine, Stylelikeu, and mindbodygreen. She lives in Brooklyn, NY.