What the Pier Gave Us

A five part poetic film about immigrants who fish at a pier in New York and the immigrant experience. What the Pier Gave Us, lyrically captures the life of a pier in a year and through the seasons. 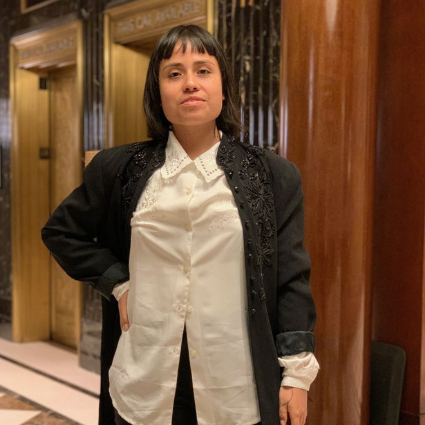 Luna X Moya (Director/Producer/DP/Editor) is a documentary filmmaker with over 10 years of experience in the film and television industry. Her editing work screened at MoMA, The Shed, A+E Networks, and AFI SilverDocs. She was the editor for a Shirley Chisholm short documentary on A+E, the co-editor for a short documentary about Beatriz Gonzalez at The Shed, and the editor for a Spike Lee Tribute at MoMA, led by Sam Pollard. Luna is a formerly undocumented, queer, and chronically ill filmmaker. She focuses on documentary films about immigration, racial injustice, family, and desire. Her second directorial film “What The Pier Gave Us,” is in development and was nominated, as well as a finalist for the Sundance Institute Uprise Grant in 2020. Luna’s debut directorial film “The Rights of Butterflies” (2012) launched with a screening tour to successfully pass the DREAM act in Maryland. The documentary short was featured in The Washington Post and premiered at the 2012 AFI Docs Film Festival. Luna transferred from a community college and received her BFA from New York University in Film & TV production. For her Senior year, she received a full ride scholarship bestowed to only two students in the entire Tisch Arts Department. She studied under the mentorship of Emmy-award-winning and Academy nominated filmmaker Sam Pollard. Continued education includes associate artist residence at ACA by Natalia Almada in 2015, Meerkat in Residence in 2016, and the Karen Schmeer Film Editing Fellowship- Diversity in the Edit Room in 2018.