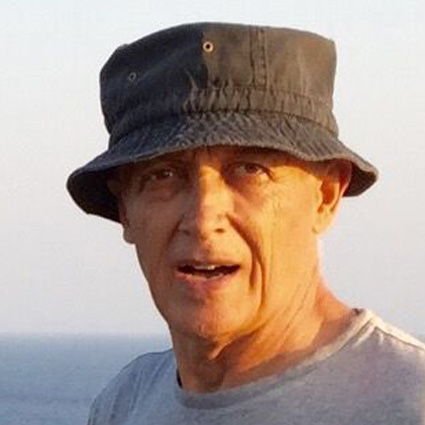 Shimon Dotan is an award-winning filmmaker with thirteen feature films to his credit. Born in Romania in 1949, he immigrated to Israel with his family in 1959 and grew up in a cooperative agricultural settlement. After serving for five years in the IDF as a Navy Seal, Dotan went on to earn his BFA in Film and Philosophy from Tel Aviv University. Dotan is a Fellow at the New York Institute of the Humanities, a recipient of a Guggenheim Fellowship Award (2012), and the recipient of a Cullman Fellowship for scholars and writers at the New York Public Library (2012). His film Hot House, examines the world of Palestinian prisoners serving their sentences in Israeli prisons. It was the winner of the Special Jury Prize at the Sundance Film Festival for Best World Documentary. Dotan’s other films have earned numerous awards as well, including the Berlin Film Festival’s Silver Bear Award for The Smile of the Lamb, and several Israeli Academy Awards, including awards for Best Film and Best Director (Repeat Dive, The Smile of the Lamb). His film You Can Thank Me Later received the award for Best Film at the Newport Beach Film Festival. Dotan has taught Filmmaking and Film Studies at Tel Aviv University and Concordia University. He currently teaches Political Cinema at New York University.

In one of the world’s most volatile regions Israeli settlers threaten to ignite the powder keg created by a half-century of Israeli settlement and political lock-in in the occupied West Bank.

If the conflict between Israel and the Palestinians really lies at the hub of the Middle East conflict, then the dispute over the future of the Jewish settlements in the West Bank lies at the very core of that conflict. Though no Jews lived in the historic Jewish heartland of Judea and Samaria before the Six Day War in 1967, it is now home to hundreds of thousands of Israeli citizens who have established residence in the occupied territories of the West Bank.

With unprecedented access to pioneers of the settlement movement as well as a diversity of modern-day settlers, religious and secular alike, The Settlers is a comprehensive exploration of the controversial communities which extend inordinate influence on the sociopolitical destinies of Israelis and Palestinians.

“A Window Into the West Bank’s ‘Wildest, Most Violent’ Areas”

“The Settlers” is a compelling, must see, tour de force outline of the Israeli Settlement issue”

“…a ticking encapsulation… is certain to ignite spirited debate”