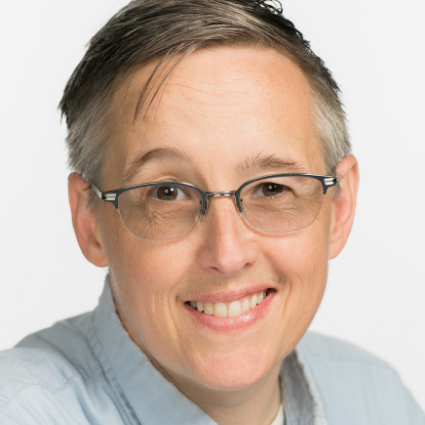 Jenni Olson is a writer and non-fiction filmmaker based in Berkeley, California. A 2018 MacDowell Fellow, Jenni is currently in development on her third feature-length essay film, The Quiet World — as well as an essayistic memoir of the same name. Her two feature-length essay films — The Joy of Life (2005) and The Royal Road (2015) — premiered at the Sundance Film Festival and have screened internationally to awards and acclaim. In 2020 the Criterion Channel launched a retrospective on Olson and her work. Also in 2020, the Harvard Film Archive established the Jenni Olson Queer Film Collection, a repository for Jenni’s work as a filmmaker and film historian/archivist. Her work as a film historian and critic includes the Lambda Award nominated The Queer Movie Poster Book (Chronicle Books, 2005) and decades of writing for such esteemed publications as Filmmaker Magazine and The Advocate. Her reflection on the last 30 years of LGBT film history, in The Oxford Handbook of Queer Cinema, is forthcoming from Oxford Press in 2021. Jenni co-founded the pioneering LGBT online platform, PlanetOut.com, and is the proud proprietor of Butch.org. She has been widely recognized for her creative writing and innovative non-fiction storytelling; and has essays forthcoming in 2021 in TSQ: Transgender Studies Quarterly, and the New Orleans Review. Jenni holds a BA in Film Studies from the University of Minnesota and is currently an independent consultant.

Lyrical, digressive, and innovative in scope and form, Jenni Olson’s latest 16mm essay film portrays the urban landscapes of California and Minnesota as it unfolds an ambitious cinematic treatise (and asserts a Luddite Manifesto). In her wide-ranging voiceover soliloquy she reflects on growing up queer and gender non-conforming in Minnesota, prompting a diverse array of digressions ranging from Prince to George Floyd to the history of French colonial brutality visited on the indigenous peoples of the state — to her Scandinavian-Minnesotan alcoholic family (astutely pondering the question: “How does anyone survive this landscape?”) The Quiet World transcends the conventional categories of cinema.

Through mostly wide, static long takes Jenni Olson’s films present a portrait of the changing urban landscape as they achieve a poetic expansion of film form. This cinematic approach also creates an absolutely unique, emotionally resonant space in which her intimate reflective storytelling unfolds. A contemplative 16mm essay film, The Quiet World portrays the mundane urban landscapes of California and Minnesota as its lyrical voiceover takes on an eclectic array of topics, concerns, and themes. The Quiet World is especially about being queer and gender non-conforming — and about butch identity and experience. Even more important than these actual subjects, The Quiet World is about larger ideas. The film is interested in vulnerability as a path to self-acceptance; nostalgia as a key to lost wisdom and returning us to this moment; and storytelling itself as a mode of survival.