A Body to Live In

A BODY TO LIVE IN is a film about the luminary, enigmatic, and complicated subcultural figure, Fakir Musafar (1930-2018). A self-identified shaman and ritualist, Musafar’s work in body modification, performance art, and photography, as sexual and spiritual practices, mobilized an entire generation of artists, perverts, punks, and queers. In response to Musafar’s work, A BODY TO LIVE IN will consider the drive to transcend body, to find belonging, and the stakes at which those needs are met. 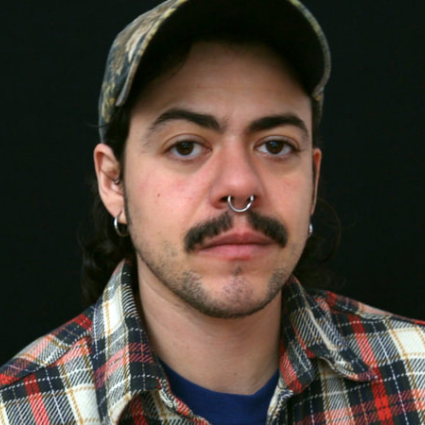 Angelo Madsen Minax is an interdisciplinary artist whose projects draw on personal experiences to explore queer and trans intimacies, chosen, and biological structures of kinship and belonging. Madsen's work is fueled by his history of participation in justice-oriented communities and DIY media activism. His documentary North By Current (2021), a poetic unpacking of the meaning of family, trans embodiment, and spirituality, was released to critical acclaim at Berlinale and the Tribeca Film Festival, followed by screenings at Sheffield Doc/Fest, AFI, Krakow Film Festival, Frameline, and Outfest. The film is currently in an extended festival run and has been acquired by PBS for national broadcast on Season 34 of POV. His previously projects have been supported by the Sundance Film Institute, the Tribeca Film Institute, LEF Foundation, and Bay Area Video Coalition, and Madsen has been awarded residencies and fellowships from Skowhegan School of Painting and Sculpture, the Core Program Houston, Bemis Center for Contemporary Art, the Flaherty Film Seminar, and Queer|Art|Mentorship. His previous works have shown at Anthology Film Archives, Museum of Contemporary Art Chicago, the Leslie-Lohman Museum, Artists Access Television, and film festivals like BAMCinemaFest, HotDocs, Ann Arbor Film Festival, KurzFilm Hamburg, BFI Flare, the European Media Art Festival, Art of the Real, Edinburgh International Film Festival, and more.